The United Kingdom will be conducting 11 TV white spaces trials in 2015.

Described as a proof of concept, eight database providers and 11 trials have been approved, and are expected to run until late 2015, in at least some cases.
The database suppliers include Spectrum Bridge, Nominet, NICT, Fairspectrum, Google Sony, iconectiv and Microsoft.

Spectrum will be available for use on an unlicensed basis, similar to the way Wi-Fi works. TV white spaces potentially will occupy the 470 MHz to 790 MHz frequencies, Ofcom, the U.K. communications regulator, says.

Some might argue the significance is that TV white spaces represents the first instance of U.K. spectrum sharing using a database approach. Up to this point, nearly all spectrum allocations have essentially been issued to specific licensed users. Wi-Fi has been the exception, available to all unlicensed users so long as user devices do not cause interference with other users.

The significance is that Ofcom is watching to “see how such methods might be applied in other spectrum bands.”
Ofcom received 22 license applications. 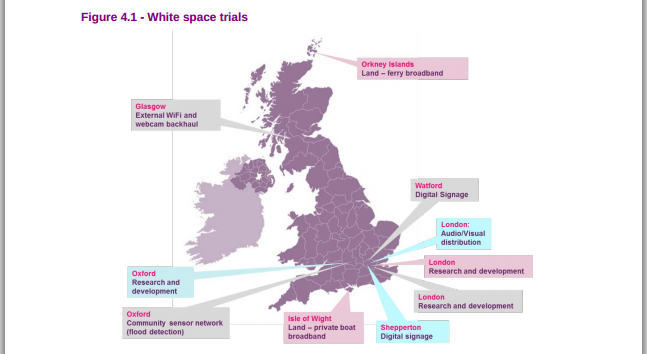