Competitive markets are different from monopoly markets in lots of ways, including the “cost” and “profit” of building different types of networks or the “cost” of identical networks. Consider this comparison by Ovum researchers of the relative costs of a new fiber-to-home network versus a new fixed wireless network using millimeter wave spectrum.

In an urban deployment, the fixed wireless network costs a bit more than a rival fiber-to-home network.

In a monopoly environment, all other things being equal, that would tend to tip any construction decision in favor of FTTH, since “cost per passing” and “cost per customer” often are directly related (for high-adoption services). 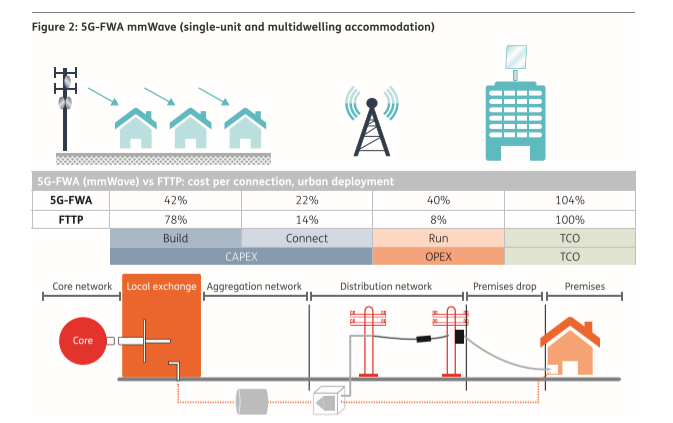 Where the FTTH network might have to generate a financial return based solely on revenues from the fixed network, the 5G fixed wireless network has revenue both from mobile and fixed services.

“Economies of scale” means lower unit costs possible because of customer mass or volume.  “Economies of scope” refers to efficiencies created by product variety, not single-product volume. The former provides the benefits of volume; the latter supplies benefits from product diversity.

Connectivity businesses in competitive markets often are profitable or sustainable only because economies of scope are possible.