As U.S. mobile operators get ready to launch–or have already launched–5G services, the sparring over “who is first with 5G” and “who is offering real 5G” has intensified, just as some of the mobile service providers argue about who has “the fastest network.” You might recall similar marketing claims when 4G was being launched. Remember WiMAX? Sprint’s WiMAX network was activated before any of the LTE networks. Some claimed then, or might claim now, that WiMAX was not “real 4G.” We might suspect that most end users did not really care.

Likewise, it is likely fair to say the end users will not care about “who has real 5G.” Typically, they care about coverage, speed and price. But the transition to 5G will be more complicated than in the past, precisely because 5G builds on advanced 4G, and 4G will keep getting better. In fact, in some cases, the actual 4G end user downstream speeds and latency might approach 5G levels.

To be sure, customers will have to buy new handsets, in most cases, to take advantage of the higher speeds, just as they have to buy new devices to get improved cameras, new form factors, bigger screens and so forth. So for several years, customers might have to weigh new devices that run 5G and advanced 4G, or just advanced 4G. It will be difficult for most customers to figure that out, so service provider retail store personnel are going to have to be even more consultative in the sales process.

And customer choices might well come down to device cost, as advanced 4G devices should generally be more affordable than early 5G devices. In the early days, 5G speeds, in most places, might not be too much better than advanced 4G, in most places. The point is that the transition to 5G, by consumers, might be a more-lengthy process than was the transition from 3G to 4G.

In part, that is because 5G networks build directly on 4G. And that means many of the features of 5G–faster speeds, especially–will be available on 4G as well. Consider the matter of indoor coverage and small cells. As Ericsson points out, the same small cells deployed for 4G indoor coverage can be used to support 5G indoor cells. At least initially, 5G NR uses the 4G command and control network to support the 5G air interface. 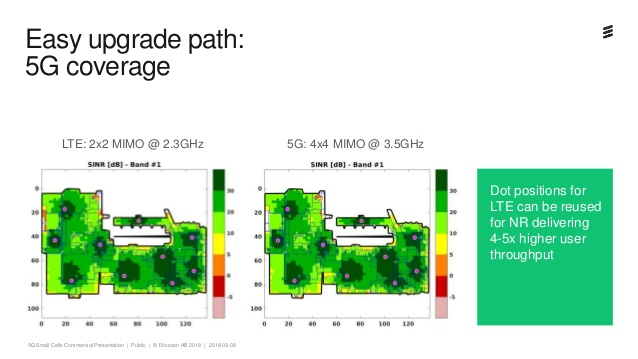 The point is that advanced 4G is going to offer very-similar end user experience compared to early 5G. Also, early 5G coverage might be spotty enough that the fallback to 4G is going to be common. All the more reason, then, to upgrade 4G to performance levels close to early 5G.