Can mobile service providers become “platforms?” Can they change their revenue models to move beyond connectivity and subscriptions?

That question often is in the background of all efforts to “move up the value chain,” enter new parts of the internet ecosystem, radically change revenue and business models or create new products and services that extend beyond connectivity.

In other words, telcos once were functionally monopoly suppliers of voice services over fixed networks. These days they are more aptly known as internet service providers who also deliver voice communications over mobile and fixed networks.

There are a smattering of other services and products some telcos supply, but the core revenue driver remains subscriptions, data connectivity and some declining amount of voice and messaging.

Most efforts to become platforms, techcos or digital service providers have the intention of moving connectivity providers into different roles within the ecosystem. As a practical matter, the simple motivation is growing revenue and attaining profit margins more akin to software and app firms. 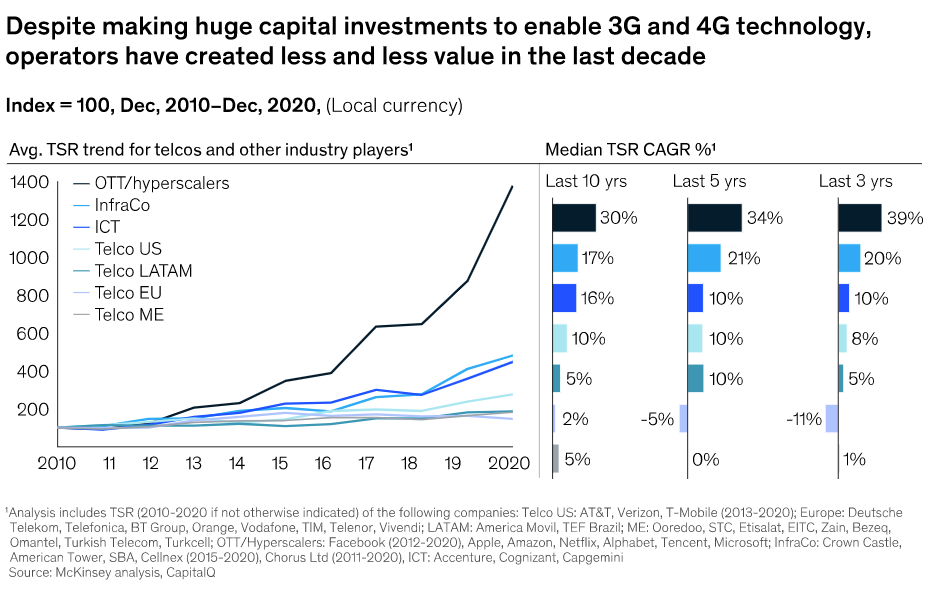 Thinking about such questions uses different language at different times.

None of these concepts are easy to explain, or commonly understood. Some might argue the “digital services provider” evolution means offering services such as internet of things, connected cars, smart cities or smart homes. Presumably the concept is that a connectivity provider supplies the apps that provide the value.

It is no easier to explain–and have people agree upon–what a “platform” or “techco” evolution means.

It never is completely clear why telco executives really mean in touting the transformation from telco to “techco.”

Many telcos–or those who advise and sell to them–say telcos need to become techcos. So what does that mean?

At least as outlined by Mark Newman, Technotree chief analyst and Dean Ramsay, principal analyst, there are two key implications: a culture shift and a business model.

The former is more subjective: telco organizations need to operate “digitally.” The latter is harder: can telcos really change their business models; the ways they earn revenue; their customers and value propositions? 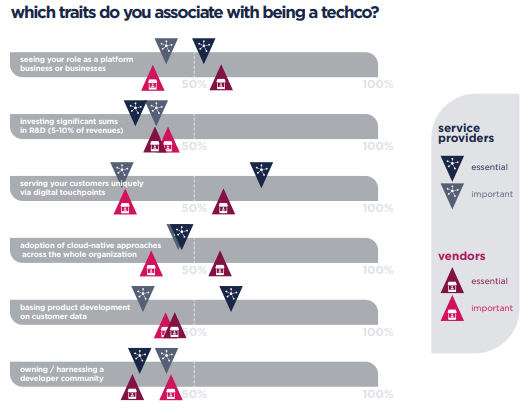 It might be easier to describe the desired cultural or technology changes.  Digital touchpoints; higher research and development spending; use of native cloud computing; a developer mindset and data-driven product development or use of use artificial intelligence all might be said to be part of becoming a “techco.”

Changing the business model is the more-problematic objective.

As helpful as it should be to adapt to native cloud, developer-friendly applications and networks, use data effectively or boost research or development, none of those attributes or activities necessarily changes the business model.

If “becoming a techco” means lower operating costs; lower capital investment; faster product development or happier customers, that is a good thing, to be sure. Such changes can help ensure that a business or industry is sustainable.

The change to “techco” does not necessarily boost the equity valuation of a “telco,” however. To accomplish that, a “telco” would have to structurally boost its revenue growth rates to gain a higher valuation; become a supplier of products with a higher price-to-earnings profile, higher profit margins or business moats.

What would be more relevant, then, is the ability of the “change from telco to techco” to serve new types of customers; create new and different revenue models; develop higher-value roles and products or add new roles  “telcos” can perform in the value chain or ecosystem.

We face the same sorts of problems when trying to explain what a “platform” looks like.

Korea Telecom wants to become a digital platform company, not a telco. That ambition arguably is shared somewhat widely among tier-one connectivity service providers globally and has been a strategy recommended in some form by most bigger consulting companies.

Simply, becoming a platform company changes the business model from direct supplier of products to a role as an ecosystem organizer or marketplace. That arguably is an aspirational goal more than anything else.

What that aspiration means in practice is that KT as a digico “will shift our focus from the telecommunications sector, where growth is stalled due to government regulations, to artificial intelligence (AI), big data, and cloud computing businesses to become the nation’s number-one platform operator in the B2B market,” said KT CEO Koo Hyun-mo.

So there are qualifications. KT, if successful, would become a platform in the business market, not the consumer market. It would explicitly aim to become the center and organizer of an ecosystem for artificial intelligence, big data analytics and cloud computing.

Purists and researchers will likely argue about whether all of that actually adds up to KT becoming a platform, in the sense that Amazon, eBay, Alibaba, ridesharing or lodging apps  might be considered platforms.

A platform, definitionally, makes its money putting buyers and sellers and ecosystem participants together. In computing, a platform is any combination of hardware and software used as a foundation upon which applications, services, processes, or other technologies are built, hosted or run.

Standards likely are thought of as platforms by some.

In other cases components such as central processing units, physical or software interfaces (Ethernet, Wi-Fi, 5G, application programming interfaces) are referred to as platforms. Browsers might be termed platforms by some. Social media apps are seen as platforms as well.

The platform business model requires creation of a marketplace or exchange that connects different participants: users with suppliers; sellers with buyers. A platform functions as a matchmaker, bringing buyers and sellers together, but classically not owning the products sold on the exchange.

A platform orchestrates interactions and value. In fact, a platform’s value may derive in large part from the actions and features provided by a host of ecosystem participants. Facebook’s content is created by user members. Amazon’s customer reviews are a source of value for e-tailing buyers.

Consumers and producers can swap roles on a platform. Users can ride with Uber today and drive for it tomorrow; travelers can stay with AirBNB one night and serve as hosts for other customers the next. Customers of pipe businesses–an airline, router or phone suppliers, grocery stores– cannot do so.

So KT can increase the percentage of revenue it earns from supplying digital, computing, application or non-connectivity services without becoming a platform. As a practical matter, that is what most telco executives have in mind when talking about becoming platforms.

For KT, even limiting its ambitions to generating more digital and non-connectivity revenue does not make it a platform. That would still be an important, valuable and value-sustaining move. But KT has a very long ways to go, even in its stated objectives of becoming a B2B platform.

It might be a long time between non-connectivity revenues in the B2B part of its business are as much as half of total revenues. And those revenues might not represent a platform transformation of the business model.

KT could win significantly without ever becoming a platform. And some might argue few telcos can ever actually hope to become platforms in the classic sense. Perhaps the more important goal is simply to reduce reliance on traditional connectivity revenues.

Unfortunately, what platform, techco or digital services provider actually means in practice falls far short of the grander visions. We still have no conclusive answer to the question of whether telcos can become something they are not.