How Attractive is 5G Fixed Wireless?

How attractive is 5G fixed wireless as a substitute product for existing fixed network internet access? Substantial, according to a new Parks Associates survey.

According to Craig Leslie, Parks Associates senior research analyst, “once the technology is explained to them, almost half are interested in replacing their fixed-line internet service with 5G home services.”

As always, consumers say they will take certain actions, and then do not; or say they will not do some things, and then do them. So it is difficult to make too-certain predictions about consumer behavior related to 5G fixed wireless, when consumers are not required to consider price, retail packaging and other elements of service.

On the other hand, substituting 5G fixed wireless for fixed network service does not require, as does 5G mobile phone service, investing in new handsets with substantial costs. In all likelihood, the effective cost of switching fixed internet access service should be minimal, if, as expected, ISPs make customer premises gear available at low recurring charges, at subsidized prices and in ways familiar to consumers.

Demand for mobile 5G service likewise seems relatively high, with the caveat that respondents likely were not told they would have to buy new smartphones to use 5G, and in various price ranges possibly up to $1000 or more.

Ultimately, 5G will be used by nearly all consumers, as 4G now is. 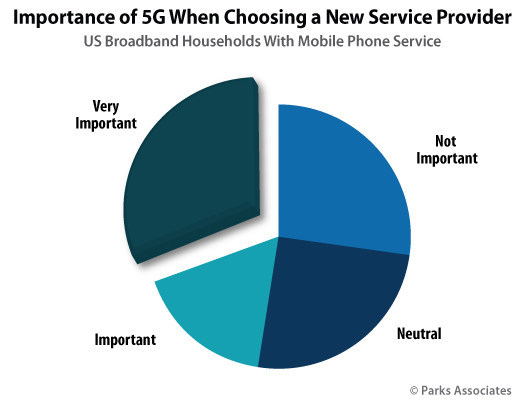 Only 13 percent of respondents reported they would pay higher fees for 5G service, which is not a surprising finding, nor necessarily indicative of actual future behavior, once the concrete value propositions are commercial realities.

And that transition could come fairly rapidly. According to Parks, 20 percent of broadband households bought at least one new smartphone in the first quarter of 2019. At that rate, a substantial opportunity to introduce 5G devices exists, once the networks are more developed, the supply of handsets is diverse and value propositions clearer.