AT&T says it will launch mobile 5G in Indianapolis this year. AT&T previously had said Atlanta, Charlotte, Dallas, Oklahoma City, Raleigh and Waco would be early to get 5G as well. Keep in mind that AT&T already launched 5G Evolution in Indianapolis in 2017.

That means a peak theoretical wireless speed of at least 400 Mbps, for devices that can handle LTE-LAA.  Using LTE-LAA, the network has peak theoretical speeds for capable devices reaching up to 1 gigabit per second.

Some will note that Indianapolis also is a market where Verizon says it will launch 5G fixed wireless services that will compete with AT&T and Comcast fixed network internet access.

So here’s the intriguing new development. We are used to measuring internet access market share in silos: share of fixed network accounts and then share of mobile accounts. In Indianapolis and perhaps dozens of other cities, that will not be so easy, in the future.

Verizon will essentially use its 5G in fixed mode to compete for consumer and business fixed network access accounts. And now AT&T might find its own mobile 5G services will become a substitute product for its own fixed network services.

The amount of market share change among fixed and mobile; cable and telco providers might change quite significantly, forcing analysts to look at consumer segment  internet access market share in a much-ore comprehensive way.

How, for example, do we characterize “typical” or “average” internet access speed? In some cases, the mobile speeds will be higher than fixed network speeds.

Comcast in Indianapolis sells consumer internet access at speeds up to 350 Mbps, and offers a 2-Gbps service that likely will mostly be purchased by businesses.

So the issue now is how providers package their offers when it is conceivable that either fixed or mobile 5G offers speeds equivalent with the best Comcast has to offer.

“We see 5G fixed wireless broadband as the biggest existential threat to broadband providers (by far),” say equity analysts at Cowen. Assume, for example, that T-Mobile US actually throws significant effort at 5G fixed wireless, and gets anywhere near its goal of 10 million accounts by about 2024.

“That would be a large majority of the entire cable industry’s broadband adds over the next six years,” Cowen analysts say.

Verizon, for its part, is targeting 30 million or perhaps 35 million homes passed, in metro markets where it has lots of fiber (places where XO has big footprint, for example) and outside its legacy fixed network territory.

That suggests Verizon could wind up competing most with AT&T, Comcast and Charter. Making a further assumption that in its chosen markets it will be Comcast and Charter that have the most market share, and already have the greatest share of faster-speed accounts, that logicall suggests the cable competitors might be at more risk than AT&T or CenturyLink.

You might argue that the telcos generally sell lower-speed services, so their customers would be most at risk from a fixed wireless entry by Verizon or T-Mobile. But most of those customers already could have switched to cable providers, were internet access speed the big consideration.

What might be the case is that customers of slower-speed telco services think those services are good enough, when bundled with other telco services, to inhibit switching behavior. 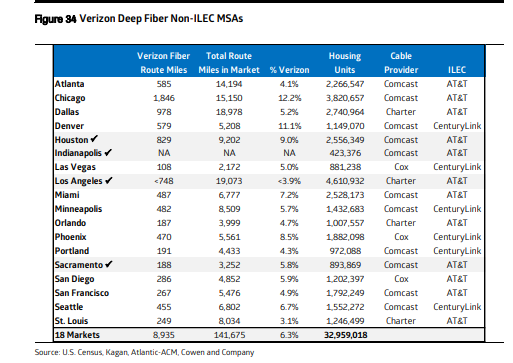 Verizon has significant metro fiber in 17 of the top “NFL” U.S. markets where it is not the incumbent.

Assuming the cable competitor in those markets has 45 percent share, IComcast could have 2.1 million homes exposed to loss, about (eight percent of its base).

Charter might be at risk to share loss of perhaps 1.1 million homes, about 4.7 percent of its base.

Assuming a 25 percent Verizon take rate when it enters those new markets, perhaps two percent of Comcast customers and one percent of Charter customers could go to Verizon. That might be a manageable loss.

T-Mobile US might take a different tack. T -Mobile expects to become a viable in -home broadband alternative especially in rural areas. The carrier believes it will, by 2021, it provide data rates in excess of 100 Mbps to 66 percent of the U.S. population, reaching coverage of up to 90 percent by 2024.

T-Mobile US execs have suggested that a service offering 100 Mbps would be a competitive alternative for perhaps 19 percent  of the population. By 2024, as much as 35 percent to 45 percent of the U.S. population might be candidates for a mobile substitute product.

Looking at fixed wireless, T-Mobile US estimates it could provide service to 9.5 million households early on. By 2024 T -Mobile expects to be able to reach 52 million rural residents with a fixed wireless solution. 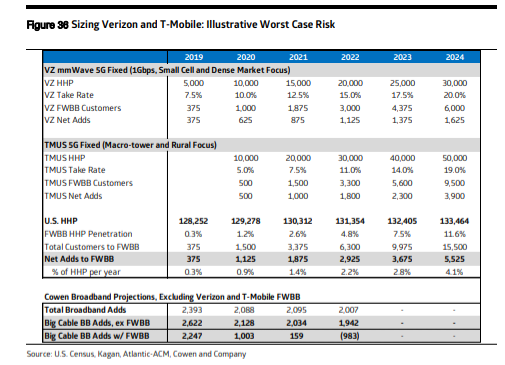 Some who decry the lack of competition in the U.S. internet access space might be surprised to see growing competition, at scale, when 5G arrives. Google Fiber once was thought to be a catalyst for such competition. Now it appears Verizon and possibly T-Mobile US will assume that role.

Sometimes it takes scale to disrupt a market. In Indianapolis, that might well be that the actor is Verizon. But AT&T’s response might also be disruptive to Comcast.

We are entering a period of greater instability in the consumer internet access business than we have seen for quite some time (decades, in fact).