Some might gasp at predictions the coming fifth generation mobile network standard (5G) will feature bandwidths up to 1,000 times greater than today’s mobile networks. That three orders of magnitude leap–in perhaps five years–is breathtaking. It implies potential bandwidth of 10 Gbps.

Similar breathtaking leaps are happening in the fixed network as well.

Though it seems almost laughable that fixed network bandwidth could grow at rates close to that of Moore’s Law, that seems undeniably to be happening.

Comcast in May 2015 will introduce Gigabit Pro, a new 2-Gbps symmetrical residential Internet access service in Atlanta, with an expected introduction in additional Comast markets nationwide.

Comcast currently expects the service to be available to about 18 million homes by the end of 2015.

That service is not likely to be purchased by many consumers. The Comcast 500-Mbps service now costs about $400 a month, so there is no telling what the price for 2-Gbps might be.

The larger point is that, based simply on historical precedent, widely-available gigabit speeds (which is likely going to be different than the speeds most consumer choose to buy) should be available in the U.S. market by about 2016. 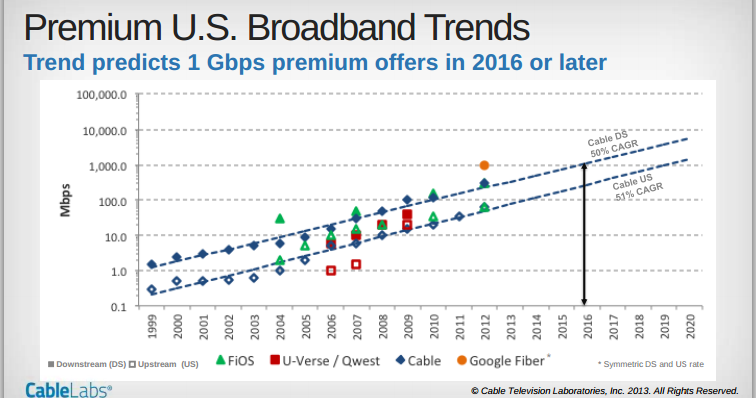