Analysts differ on precisely when global mobile industry revenue will reach its peak, and then begin to decline. But we are growing closer to that point. Some believe the peak already has been reached.

That bears emphasis. Global telecom revenue has been driven by mobile revenue for a couple of decades. But growth is not limitless. Eventually, when every prospect has become a customer, markets flatten and then decline, in the absence of new revenue sources of some magnitude.

And while we cannot yet know what new connectivity-based revenue sources might arise, it is possible that the great age of connection revenue, as the driver of telecom success, is about to hit its end. That would be a historic shift, indeed.

Annual global operator-billed revenues from voice and data services will fall by over $50 billion (about six percent) over the next five years, from $837 billion in 2017 to $785 billion in 2022, according to Juniper Research.

Other analysts think a global peak revenue might not be reached until perhaps 2021. Predictions for 2018 revenue range from flat to negative two percent.

On a global basis, the dollar value of operator-billed monthly average revenue per user fell by 62 percent between 2005 and 2017, to $9.20, Juniper Research estimates.

That decline is structural, and not caused by temporary issues such as economic slowdown. 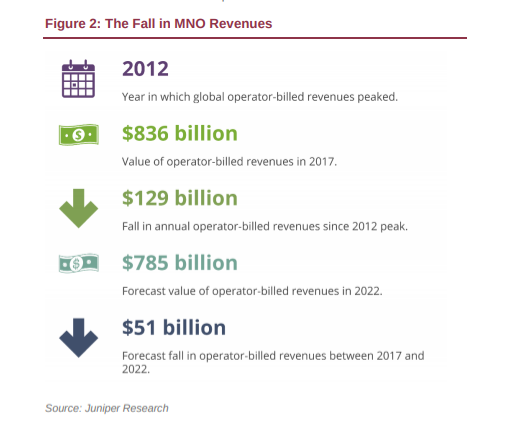 That really should come as no surprise. Every telecom product has a product life cycle. Eventually, every potential prospect already has become a customer. Product substitution is happening, there is substantial new competition and mobile adoption in developing countries, which has driven global growth for more than a decade, is slowing.

In 2013, the dollar value of global operator-billed revenues fell for the first time.

In both West Europe and Central & East Europe, the dollar value of revenues peaked in 2008.

New revenue sources such as internet of things apps and connectivity will help, but will not replace the lost voice and internet access revenues. Internet of Things revenues might generate some $8 billion by 2022.

Still, a rational observer might well conclude that, going forward, revenue sources will have to diversify beyond connectivity, as that source might well have reached a historical peak, with decline to follow.