Virtually every business achieves lower costs per unit with greater scale, at least in part because fixed costs can be amortized over a bigger base of customers or units sold. The converse also is true: diminishing scale can lead to higher costs, all other things being equal, because fixed costs are amortized over a smaller number of customers or units sold. We can see this in productivity statistics.

Levels of technology investment might explain some of the divergence. But demand shifts arguably account for most of the change.

In the wired industry, output peaked in 2000. In fact, the fixed network part of the industry actually produced less output in 2018 than it did in 2000. Conversely, output for the mobile industry has continued to multiply, growing at an average annual rate of 13.1 percent since 2000, says the U.S. Bureau of Labor Statistics. 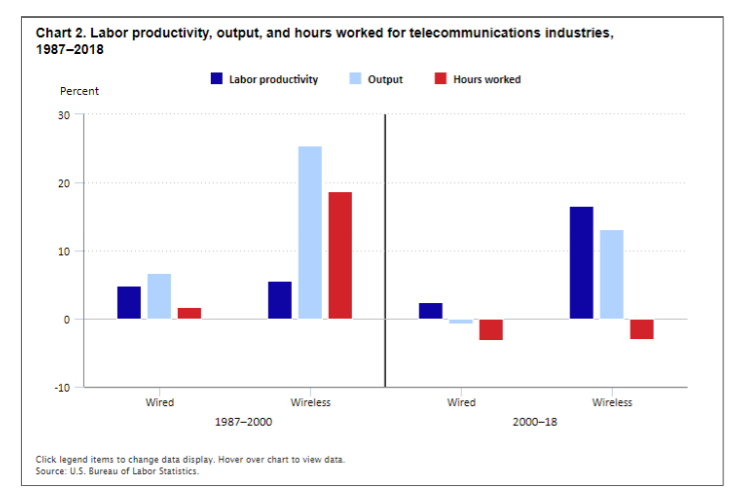 The issue is how to explain the differences. If one believes there is a causal relationship between technology adoption and productivity, lower capex for fixed networks–and much higher investment in mobile–might be part of the answer.

But it also is easy to point to diminished customer demand for products delivered on a high fixed cost platform. As subscriptions have fallen by about half, the cost to serve each remaining customer is correspondingly higher. That automatically hits productivity.

Put another way, most productivity problems in the fixed networks segment of the business could be fixed if customer demand were to double.