Revenue growth is arguably the paramount strategic concern for access service providers in developed markets that are virtually completely saturated, meaning almost every person who wants to use mobile devices and networks already is a customer. And in highly-competitive markets, boosting revenue means taking market share from the other contestants. None of that is a recipe for growing average revenue per account.

In the U.S. mobile market, for example, revenue growth has been slowing. 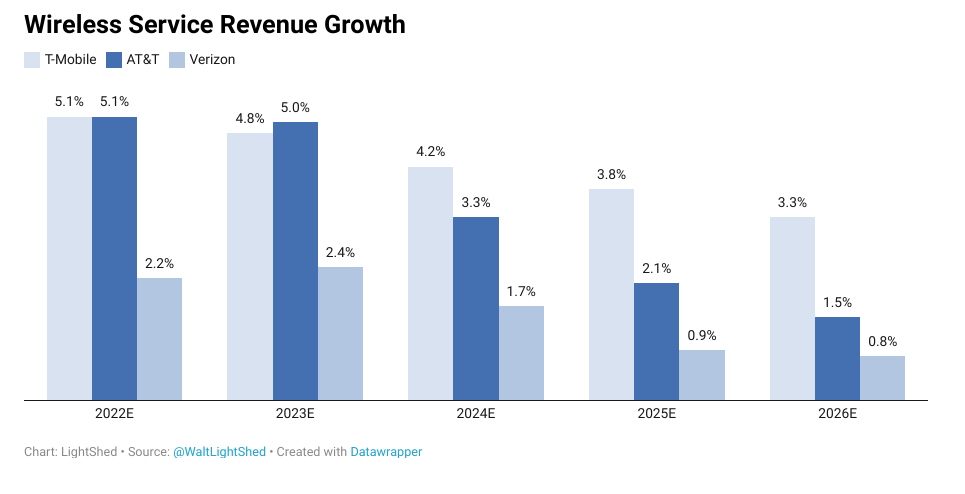 But connectivity service provider revenue growth rates have been slowing globally as well. Growth rates of about 2.4 percent are predicted by Analysys Mason. IDC is a bit less optimistic, forecasting 1.9 percent growth over the next five years.

Looking only at fixed broadband and mobility services, Omdia predicts growth of up to 14 percent. Total revenues will grow at negative or slower rates, as voice, messaging and enterprise revenues contract in many markets.

Precedence Research thinks revenue growth could reach nearly five percent per year through 2030. Most of that growth, everyone expects, will come in developing regions which are adding subscribers.

In developed regions, growth will be quite slow because of market saturation.

The issue for some leading mobile providers is growing competition from cable industry providers, with some additional danger from Dish Network, a new 5G mobile network provider. T-Mobile has been the aggressor, taking market share steadily on a “value” platform, but also now on a “network quality” dimension, as many surveys show end user experienced speeds on T-Mobile’s network rival those of Verizon, which historically has positioned itself as the quality leader, with higher average revenue per account.

AT&T’s mobile market positioning has seemed unclear to some of us. AT&T has not been the clear “network quality” leader or the “value” leader. That might help explain why AT&T now has fallen to be only the third-biggest service provider by accounts.

So perhaps the biggest single influence on subscription revenue will continue to come from market share shifts between T-Mobile, Verizon and AT&T, in both consumer and business segments. Over the past year, both T-Mobile and AT&T have been taking share.

Efforts to boost average revenue per account will help, as well new accounts supporting internet of things devices. How much that will matter remains to be seen, as account shifts will probably matter most.

Maintaining or raising prices in a competitive market never is easy and arguably is doubly hard in saturated markets.

It is a problem service providers in all markets increasingly face.