Spectrum-based Internet access networks are imperative if the fixed network business model continues to deteriorate, for large or small providers, in developed or developing countries.

Though investment barriers for broadband fixed network infrastructure have declined over the past several decades, revenue prospects have dimmed.

By about 2020, smaller U.S. cable TV companies are going to experience zero profit margins on their linear video programming businesses, according to the American Cable Association.

Some would argue Verizon Communications likewise will have a hard time earning a profit on its own widespread investment in fiber to home networks.

Video is only part of the business model issue, but the telco linear video business case has been challenging for quite some time.

One study conducted for an independent U.S. telco in the early 1990s found the video subscription business would reach positive net present value only after eight full years of operation, even with a “first installed cost” of just $800, at $365 annual revenue for a subscriber.

The analysis by our consulting team assumed at 20 percent net income and a 12-percent discount rate. In other words, the venture would make money, but only barely, with breakeven in year nine of the 10-year investment lifecycle.

Even that analysis assumed use of fixed wireless access, as the first installed cost of asymmetrical subscriber line in the early 1990s ranged as high as $8,000 per line, at a time when fiber to the home cost $4,500 per line and fiber to the curb cost about $2500 per line.

The broader point might be the growing importance of scale as a driver of the linear video business model, and a growing potential threat to the survival of the business model as over the top alternatives, costing less, become more available.

Should that happen, the business model even for the larger service providers will be challenged, as important as linear video might presently be, as part of the triple play bundle.

With voice and video business cases severely challenged, and with growing threats to the linear video model, it will come as no surprise that spectrum-based approaches, ranging from mobile networks to satellite and Wi-Fi, widely are seen as the likely platforms in most parts of the developing and developed worlds. 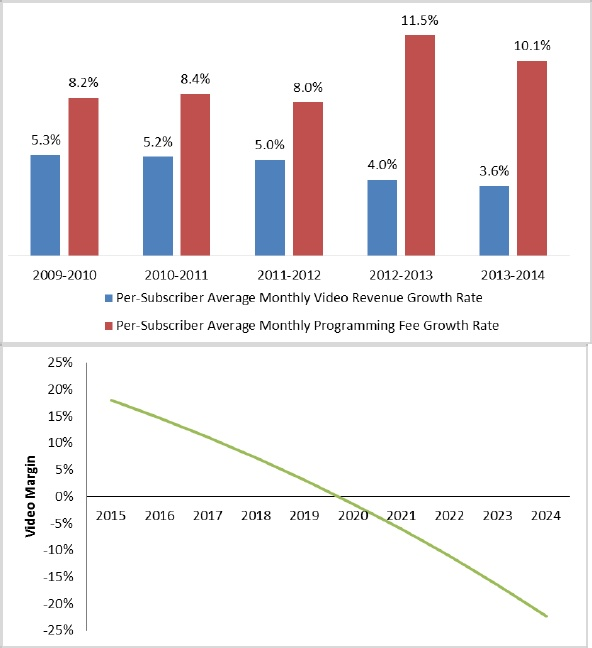