Spectrum licenses make up a major portion of mobile operator assets: an average 35 percent of the assets of U.S. mobile operators, for example. In other parts of the world spectrum assets are close to 20 percent of assets, according to consultants at Deloitte. 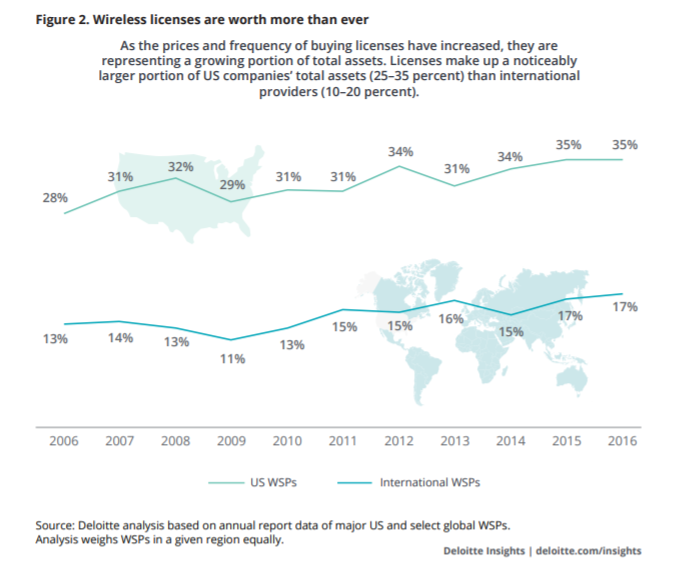 But the valuation of spectrum assets is changing, in large part because supply is increasing so much; in part because demand is growing. But as more reliance is placed on  unlicensed spectrum and shared spectrum, valuation metrics will likely change. The former “costs nothing,” the latter costs “less,” for priority licenses, or “nothing,” when used in unlicensed form.

Scarcity always has been the cardinal rule for mobile and other communications networks. Without licensed spectrum, of which there is a limited physical supply, no entity has been able to become a service provider (on a facilities basis). But it is scarcity itself which now will be challenged.

So spectrum costs should fall, as effective supply increases dramatically. The reasons are many. Small cell architectures, multiple-input-multiple-output radios, beamforming, dynamic spectrum sharing and millimeter wave assets, plus spectrum aggregation and spectrum sharing vastly change the supply side of the market.

Among the important innovations that will change spectrum usage is that devices will no longer be limited to communication with just one cell tower at a time. Instead, devices will be able to communicate simultaneously with several towers, over different frequencies and using different radio protocols.

That is radically new, and will allow 4G spectrum, for example, to fully support 5G devices, even before 5G radio resources are fully deployed.

But in addition to vast increases in capacity, other important changes, such as channel width, are important. Basically, channel width determines throughput. The wider the channel, the more throughput is possible. Where first generation mobile channels were only 25 kHz to 30 kHz wide, 2G brought channels of 200 kHz or 1.25 MHz.

In physical terms, the amount of total new spectrum (licensed and unlicensed) for mobile and other networks will increase by an order of magnitude to two orders of magnitude (10 times to 100 times). Consider that all mobile spectrum available to U.S. mobile operators is in the neighborhood of 600 MHz to 700 MHz.

Nor is that actually unusual. Every next-generation mobile network has increased data rates by an order of magnitude, for example.

But the Federal Communications Commission already is moving to commercialize an order of magnitude of new spectrum for mobile and other communications purposes.

The precedent is Wi-Fi, which represents a majority of smartphone connection time and transferred data, by all accounts.

The big point is that service provider ability to use spectrum, plus its supply, are growing by orders of magnitude. Spectrum rights still are vital. But the cost of obtaining spectrum should fall. New business models will be possible as that happens.

The best current example is the ability to sell wireless or mobile internet access at prices that are close to those of fixed internet access, something that never has been conceivable before.