In 2001 the Federal Communications Commission created a new unlicensed band of seven GigaHertz worth of spectrum between 57 and 64 GHz, available for wireless communications.

The 60-GHz wireless band was likely chosen for unlicensed use at least in part because of the high signal attenuation. As this graph shows, signal attenuation caused by oxygen absorption becomes much higher in the region around 60 GHz than at the lower and higher frequencies around the 60-GHz peak. 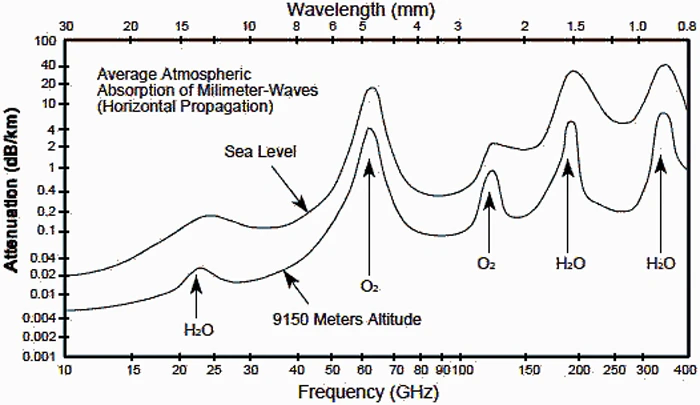 On the other hand, high signal attenuation is less of an issue for indoor or short-range communications such as Wi-Fi, which makes 60-GHz signals feasible for local signal distribution.

Still, point-to-point wireless systems operating at 60 GHz have been used for many years by the intelligence community for high security communications and by the military for satellite-to-satellite communications, in large part because the high oxygen attenuation also means greater security.

60 GHz satellite-to-satellite communications prevent eavesdropping because the earth’s atmosphere acts like a shield.

Also, highly-focused 60-GHz signals have another advantage for terrestrial communications. The beams can be focused tightly enough that there is little interference with signals at other frequencies, on other paths. That is part of the thinking behind the Terragraph platform, used either for signal trunking or signal distribution (end user access).

Also, despite the high path loss at higher frequencies, the right antenna design and use of advanced chip-level signal processing can drastically reduce signal loss compared with sub-6-GHz bands. It is possible that millimeter wave signals up to 300 GHz can have signal loss of 10 dB/km.

That should enable mobile use for small cells covering up to about a kilometer, or fixed access at up to about 10 kilometers.

The other point worth making is that we now are about 20 years removed from the decision to allocate the 60-GHz band for unlicensed use, with commercial deployments yet to scale. It sometimes takes much longer than expected for a new resource to be deployed commercially.