Some observers believe most service providers will not be easily able to build 5G networks because they will be so expensive. Others are more sanguine, arguing that there are many reasons why 5G could wind up costing no more than 4G, a slight increase to 4G, or perhaps even less than 4G.

At least one observer has tried to predict the level of 5G infrastructure spending by mapping the actual global 4G spending pattern, and comparing it to one prediction of 5G spending.

As always, assumptions matter. In this case, the assumption is that the pattern of 5G investment follows the same model as 4G, in terms of early-adopter countries and service providers.

In other words, early adoption will be lead by North America, East Asia and some areas of Western Europe. The clear difference for 5G is that China is likely to be among the early adopters.

There is one important consequence: even if 5G investment is about the same as 4G, the early spending will appear to be higher because a market as big as China is among the first movers.

That does not necessarily imply that overall 5G investment globally will differ much from 4G, only that some spending is shifted earlier in the cycle.

There are other complicating factors. Many believe 5G investment will be higher because the reliance on small cells, to support millimeter wave frequencies, will drastically increase the number of new cell sites.

Also, all those cells will require backhaul, so estimates for spending on 5G backhaul likewise are higher than for 4G. 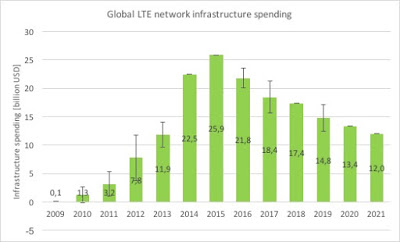 Others might not agree. Indeed, some argue 5G costs might well be lower than 4G, or might come at a slight premium. There are many reasons.

Small cells might only be needed in dense urban cores. Open source network elements, virtualization, better radios, use of unlicensed and shared spectrum or shared infrastructure will change the cost curve.

Korea Telecom says that, in its 5G deployment to support the recent Olympic games, the use of 28-GHz spectrum required small cells. KT says that, compared to 4G, that meant four times the number of cells.

That might shock some, but that corresponds to a reduction of 50-percent in the cell radius of a 4G macrocell. Mobile operators are well aware of the cell geometry impact of reducing cell size, so the four-fold increase in number of cells arguably is a pleasant surprise.

That increase in cells means the cell transmitting radius was reduced just 50 percent from 4G deployments using frequencies far lower in the spectrum range. Many would guess that, in urban deployments, cell radii might have to shrink far more than that, which would increase the number of cells four-fold for every additional 50-percent reduction in cell radius.

The point is that, in the 5G era, mobile operators will have worked quite hard to bend the cost curve, meaning that our old assumptions about infrastructure cost will have to be revised lower. 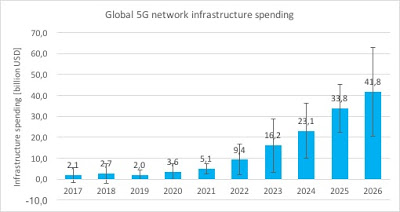 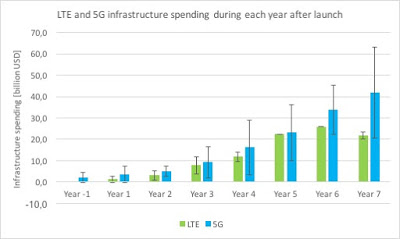 It is not at all clear that 5G will cost multiples of 4G, double 4G or even 60 percent more than 4G, which is a range of casual thinking about 5G infrastructure costs.

Infrastructure spending does not deviate much, at any one carrier, year over year. Sure, periods of investment in the next generation network happen. But service providers generally offset capex loads by postponing other investments.

And service providers now have very-high incentives to reduce capex and opex, to support profit margins under conditions when revenue growth is quite limited.

All of that suggests a strong incentive to keep overall spending in line, even as the 5G network is built.