It should come as no surprise that spectrum costs to support 5G are dropping, on a MegaHertz per POP (person) basis, which is how we measure prices.

MHz-POP prices are dropping for reasons of basic supply and demand. First of all, supply is growing by 10 to 100 times over the total amount of mobile spectrum presently available. More unlicensed spectrum also is coming, as well as spectrum sharing and spectrum aggregation, plus heavier use of small cells, all of which expand the effective amount of bandwidth.

Price per MHz-POP also is declining because of buyer expectations about potential profits and business models. Simply, potential buyers believe they must pay less than in the past to acquire licensed spectrum.

Smaller cell architectures have been one of two primary ways of increasing the effective use of spectrum, and in many cases carriers are choosing to use network architecture as an alternative and complement to spectrum purchases. Verizon, for example, is among firms that have said they believe cell division–a traditional tool–is a viable alternative to buying spectrum.

New spectrum is part of the explanation. But millimeter wave assets at higher frequencies are far more capacious than spectrum in the traditional lower-frequency (sub-2 GHz) bands.

The point is that it should not be surprising why spectrum prices are dropping. Spectrum value was in the past was scarce. It now will be plentiful. 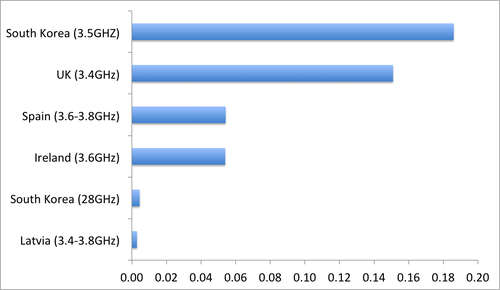