Global spending on Internet of Things sensors, software and services will reach $772.5 billion in 2018, an increase of 14.6 percent over the $674 billion that will be spent in 2017, Gartner predicts.

IoT hardware will be the largest technology category in 2018 with $239 billion going largely toward modules and sensors along with some spending on infrastructure and security.

Software will be the fastest growing technology segment with a five-year CAGR of 16.1 percent. Services spending will also grow at a faster rate than overall spending with a CAGR of 15.1 percent and will nearly equal hardware spending by the end of the forecast.

“By 2021, more than 55 percent of spending on IoT projects will be for software and services,” said Carrie MacGillivray, IDC VP.

Asia/Pacific (excluding Japan) will be the geographic region with the most IoT spending in 2018 ($312 billion) followed by North America (the United States and Canada) at $203 billion and Europe, the Middle East, and Africa (EMEA) at $171 billion.

China will be the country with the largest IoT spending total in 2018 ($209 billion), driven by investments from manufacturing, utilities, and government.

IoT spending in the United States will total $194 billion in 2018, led by manufacturing, transportation, and the consumer segment.

Japan ($68 billion) and Korea ($29 billion) will be the third and fourth largest countries in 2018, with IoT spending largely driven by the manufacturing industry.

Latin America will deliver the fastest overall growth in IoT spending with a five-year CAGR of 28.3 percent. 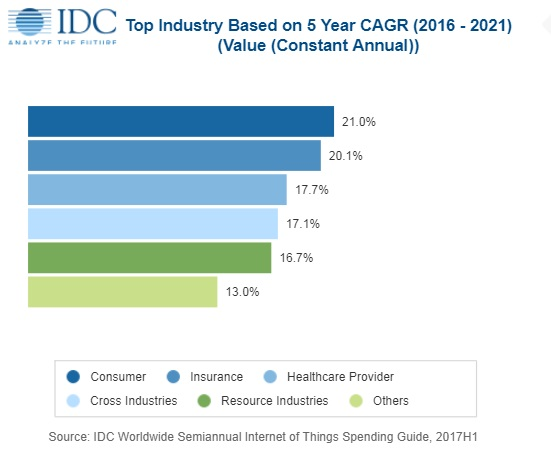 The industries that are expected to spend the most on IoT solutions in 2018 are manufacturing ($189 billion), transportation ($85 billion), and utilities ($73 billion). IoT spending among manufacturers will be largely focused on solutions that support manufacturing operations and production asset management, IDC said.

In transportation, two thirds of IoT spending will go toward freight monitoring, followed by fleet management. IoT spending in the utilities industry will be dominated by smart grids for electricity, gas, and water.

Cross-Industry IoT spending, which represent use cases common to all industries, such as connected vehicles and smart buildings, will be nearly $92 billion in 2018 and rank among the top areas of spending.

Consumer IoT spending will reach $62 billion in 2018, making it the fourth largest industry segment. The leading consumer use cases will be related to the smart home, including home automation, security, and smart appliances.