So far, 5G networks launched by Verizon, AT&T and Sprint have had limited footprints and relatively few users. As on any lightly-loaded network, available bandwidth per user is high, ranging from 484 Mbps to 1.8 Gbps in tests by Speedtest.net. It is hard to forecast what average speeds might be like when the networks are fully built out and lots of customers switch from 4G to 5G service.

Will 5G service providers be able to earn incrementally-more revenue for 5G subscriptions? The answer might hinge mostly on whether consumers perceive more value, but also partly on how service providers react to competition from their rivals. Potential value is hard to measure, considering customer satisfaction as a possible proxy for value.

We might debate whether U.S. consumers are satisfied with their mobile or fixed network internet access services. Much hinges on which internet service provider a customer uses. There is about a 10-point spread between the best and worst ISPs. That is about half the spread between the industries scoring highest and lowest in the ACSI ACSI rankings.

That noted, ISPs and linear video subscription services were at the very bottom of industry rankings in 2018.

Still, some surveys have found “overall satisfaction with today’s internet services is high, with 92 percent and 87 percent of users at least somewhat satisfied with their mobile and home internet services respectively.”

That perception of value is inversely related to the cost per bit on mobile and fixed networks. 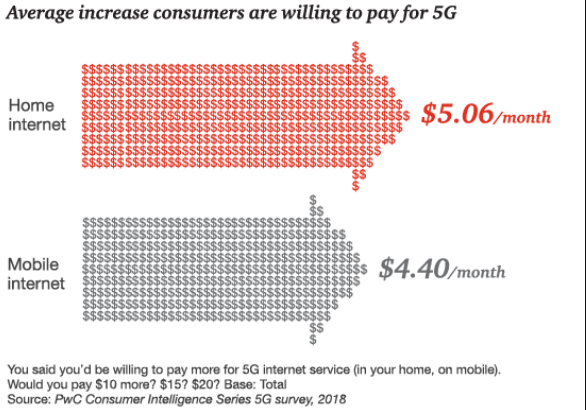 As always, much hinges on actual usage, compared to the retail price for a usage allowance. Still, customer satisfaction might matter as 5G services are launched. Will 5G be experienced as more satisfying, representing higher value? And, if so, will that lead to willingness to spend more?

Some observers believe there will not be a sustainable price premium for 5G service. Others might argue a temporary premium is possible. Such share of wallet increases always are difficult.

On the other hand, some might note that U.S. household spending on communications is quite low, especially for wealthier households. Mobile service spending is rather constant as well, year over year.

So there arguably is room for upside, provided customers perceive significant new value.