With the exception of its buying Vodafone’s interest in Verizon Wireless for $130 billion, most of Verizon’s acquisitions have been far smaller. The overall pattern might indicate that Verizon spends most of its acquisition funds on network assets.

So it probably is not surprising that the choice of Hans Vestberg as the next Verizon CEO suggests to most observers an investment priority on 5G assets, not content or other “up the stack” assets, or even operating efficiencies.

Some of us would not necessarily agree with that view. It is true that Verizon sees itself as the leader in network quality and a first mover where it comes to each next generation network. Iin its acquisition strategies, Verizon has emphasized connectivity assets.

Verizon has for some time been acquiring “up the stack” assets. Verizon sees its solution and platform assets as being built on top of the network platform, so the Vestberg pick likely indicates Verizon retains that view. But Vestberg also is considered a merger and acquisitions expert, so it is possible to suggest that Verizon believes it has to pair its 5G leadership with clever picks of firms and assets that can supply value “up the stack.”

There is another way to look at what might otherwise be called a ”5G first” strategy, and that is to look at the revenue lift that strategy might provide, compared to alternative investments of capital.

And the essential reality is that incremental 5G revenue is unlikely to provide all that much revenue lift.

If Verizon is successful using its 5G network to attack a fixed wireless opportunity worth about $7.5 billion, and  internet of things connectivity revenues of about $5.4 billion, that implies something like $13 billion annually in incremental revenues, in perhaps five years time.

Here are the assumptions: Verizon believes it can address about 30 percent of  U.S. homes, mostly out of territory, using 5G fixed wireless.

If there are some 130 million U.S. homes, that implies access to about 39 million potential new accounts, a significant new opportunity if one assumes each new account could generate $80 a month in recurring revenue.

Were Verizon to get 20 percent of potential customers as new accounts, 5G-based fixed wireless could generate $960 per account, per year, on a base of 7.8 million locations, it could realize $7.5 billion a year in additional annual revenue.

That is about 5.5 percent incremental revenue lift for Verizon. That is interesting, but not transformational in any way.

GSMA has predicted that connectivity revenue will be about five percent of the total IoT revenue opportunity.

Again, that is nice, but hardly transformational. Verizon might believe it will do much better than that, longer term.

So some might argue that something else must be at work. And that likely is a move into other parts of the value chain built on 5G, including internet of things apps, as the amount of new connectivity revenue from IoT likewise will be interesting, but not transformational.

The point is that incremental new revenue Verizon can drive directly on 5G connectivity services is not so large as to constitute a growth strategy.

Consider that, if approved, the AT&T acquisition of Time Warner might generate $31 billion in incremental revenue for AT&T, immediately.

There are “size of debt” issues, but Time Warner is a “book revenue now” gambit, in addition to changing AT&T’s business sources profile.

For Verizon, additional acquisitions arguably are necessary, eventually. The reason is simply that both Verizon and AT&T have gotten most of their revenue growth from acquisitions, not internal and organic growth. 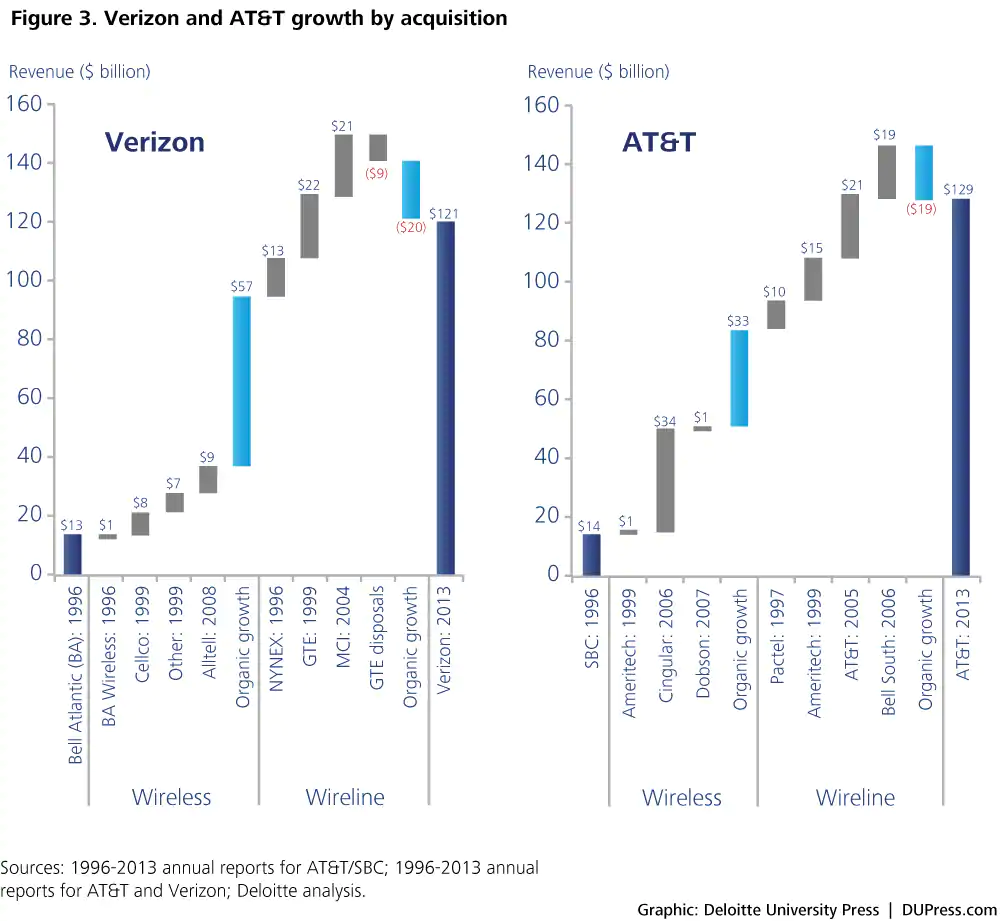 Since 2013, AT&T has dramatically changed its revenue profile by acquiring DirecTV, immediately becoming the largest U.S provider of linear video.  International acquisitions, though smallish, also indicate where AT&T could go next, beyond content.

Verizon’s biggest deal since 2013 was acquiring Vodafone’s stake in Verizon’s mobile business for about $130 billion in 2014. But debt load from that deal also limit Verizon’s ability to make other big asset purchases. 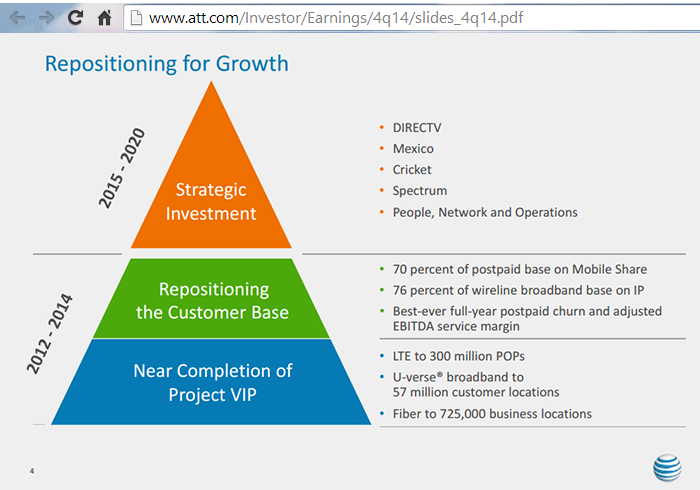 Although the appointment of Hans Vestberg as the new CEO of Verizon has been interpreted as a focus by Verizon on “5G,” as opposed to some other strategy, such as getting into content ownership in a bigger way, beyond the Oath brands.

That might not necessarily mean Verizon has in mind a strategy something like “doubling down” on connectivity services as a driver of growth, which is one way the strategy might be interpreted.

Instead, 5G investments are “only” the way Verizon keeps its claim to be the quality network leader, where it comes to connectivity services, while actively making acquisitions to build its “up the stack” assets in internet of things areas, for example.