Charlie Ergen, Dish chairman, always has believed that spectrum has business value, and should be acquired whenever possible, even if his firm had no immediate way to monetize it, and even when nobody is quite sure how monetization would happen. Many observers over the decades have quipped that “even Charlie” might not always have a clear view of the end game.

Many observers, for example, were of the opinion that Ergen would simply sell his spectrum, and not actually build and operate a 5G network. Many could argue some version of that still will happen; that Ergen will sell the whole 5G business at some point.

That would not be unexpected for an entrepreneur that has successfully made one or two business transitions already–from satellite dishes to direct broadcast satellite; from DBS to video streaming–and is setting up the mobile communications business as the successor to DBS and streaming.

The point is that though many other established businesses appreciate spectrum when it already is fundamental to their businesses, not so many actually value spectrum in advance of having an immediate purpose in mind.

Throughout, Egen has acted boldly, always on the assumption that spectrum has value, even when a clear path to putting that spectrum to immediate revenue-generating use is not clear.

But Ergen is a gambler and a disrupter, many would say, nearly always cash strapped and without a clear path to investing what would be required to monetize the spectrum assets.

Dish’s current 5G network, for example, might be said to represent the minimum necessary to avoid losing its spectrum licenses. Coverage is far from “nationwide” while handset selection is quite limited. So limited, in fact, as to suggest Dish is not yet ready to compete head to head with the other three big national providers. 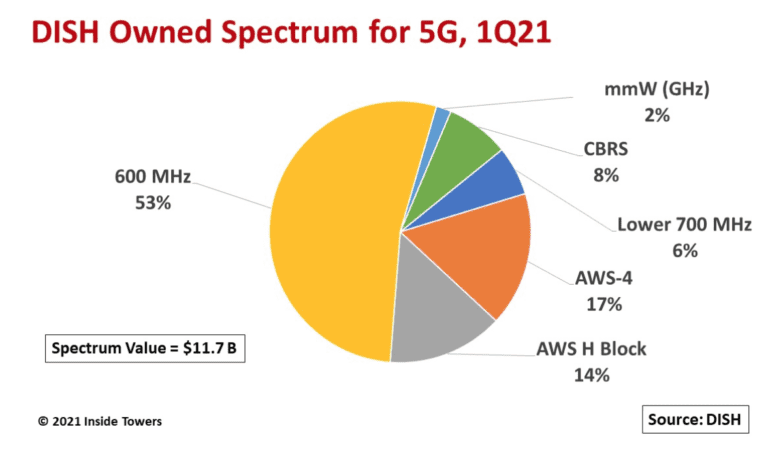 Indeed, at this point, the value of Dish spectrum almost certainly is greater than the value of Dish’s operating businesses, as the satellite video business is shrinking and the 5G network is not yet available widely, with the other attributes (handset selection, among other things) that make a national mobile network attractive to potential customers.

Dish holds around 150 MHz of sub-6 GHz spectrum (low-band and mid-band)–valued for its coverage capabilities, not capacity–compared to Verizon and AT&T, which own around 290 MHz each.

But remember the strategic value of acquiring an operating company for the value of its spectrum licenses, as T-Mobile did with its Sprint acquisition, boosting T-Mobile’s trove of mid-band spectrum suitable for 5G use.

By Federal Communications Commission rules, the other incumbent service providers could not buy Dish’s spectrum assets before 2026.

Ergen is not the only entrepreneur who has viewed spectrum as a way to build a new business. But he is among the view that have been able to realize that vision, even if the final story has not been told. Consider the bankruptcies of first-generation low earth orbit satellite constellations.

Two decades later we see multiple burgeoning LEO constellations. One might already note that demand is likely exceeded by supply, so consolidation or failure loom in the future.

The point, though, is that visions of what can be done with spectrum sometimes do not materialize. Sometimes a few decades must pass before everything lines up. In other cases visions are faulty.

But few business leaders other than Charlie Ergen have had such continual belief that spectrum has value and should be acquired whenever possible.