Will use cases, business models, revenues and value of 5G networks be similar to, or different from, 5G? Different, some say. Whether quantitative changes can create qualitative changes is the issue.

For consumers, 5G eventually will mean both lower latency and an order of magnitude (or more) increase in access speed. Presumably, both of those changes eventually will alter behavior, and allow new apps and use cases to be created.

in the past, new mobile platforms in the past have produced significant consumer behavior changes. Texting was created by 2G. Mobile internet access was enabled by 3G. Mobile video became consumable with 4G. So it would not be surprising if some new use mode emerged in the 5G era.

“4G thinking cannot be used to evaluate 5G ideas,” Alex Holt, KPMG Global Chair, Media & Telecommunications, has argued. “The reality is that 5G will be the catalyst to significant long term changes in the way people communicate, and what gets communicated.”

A statement so sweeping always is liable to be misinterpreted, but look at the way Holt frames his statement.

“We communicate to share needs and important information,” Holt has said. “The second level adds more sophisticated language and comprehension, allowing us to share thoughts and ideas.”

The money quote probably is this: “The most sophisticated thing humans can do with communication is to share feelings and emotions.”

That perhaps is on the order of the way Nokia Bell Labs has positioned the future of networking, where the value proposition for connectivity is quite different. The thesis is that communications network value will be created to the extent that it “creates time” for people and augments human intelligence.

Nokia does that mean that in the astrophysics sense of manufacturing time itself. Think of the word “productivity” or “efficiency” and the sense arguably is clearer. 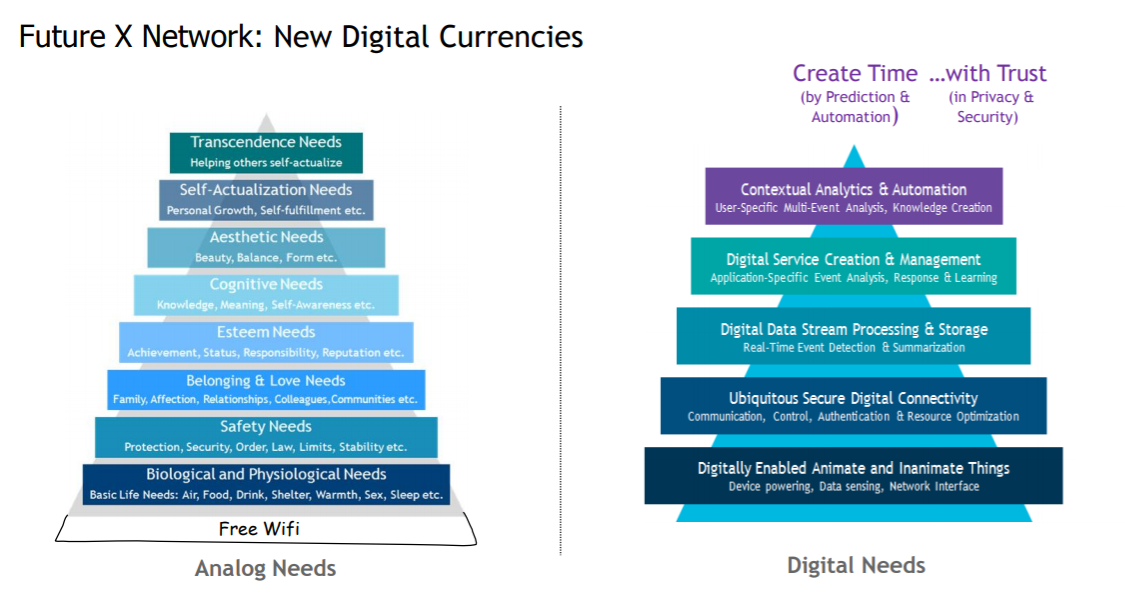 In other words, connectivity is not going to be the reason businesses, organizations and people spend money on communication capabilities, in the sense of “people want holes, even when they buy shovels.”

That is akin to the past thinking we have used about the value of any computing or communications capability: it is the solution to a business or consumer problem, not an end in itself. People do not spend money on smartphones because they like carrying little computers in their purses and pockets.

The devices only enable the conversations they can have with people; the information they can discover immediately; the transactions they can conduct; the music and video they can watch. It is likely that sense which drives the Bell Labs notion of value driven by the ability to “create time.”

Nor would it be in keeping with the concept to pin all the coming changes on 5G or communications capabilities, but on a complex of changes anchored by artificial intelligence, which Bell Labs prefers to call “augmented intelligence.”

Many would argue the big shift–as was started in the early days of the visual internet–is in the direction of audio and visual content, media that are “warmer” than voice; more capable of expressing emotion and context than text-based messaging.

Holt’s notion likely will prove correct in another sense. Only in the first days of analog mobility networks was the business driven by business and enterprise use cases. Since 2G, up to 4G, consumer adoption has driven the global mobile business, and the whole telecom business as well.

In the 5G era, the big opportunities for use case, revenue and profit growth will come from enterprise sources once more, in the form of all sorts of internet of things use cases and applications. It is that sense that likely underpins Holt’s suggestion that 4G thinking will not be so helpful in imagining 5G use cases.