Ignoring for the moment access to the millimeter wave spectrum, the impact of the U.S. C-band auction of 280 MHz spectrum is considerable and likely foundational for U.S. 5G prospects. The reason is simply that the mid-band spectrum offers the best combination of 5G coverage and capacity gains. Mid-band spectrum essentially represents table stakes for 5G.

C-band now adds nearly the equivalent of the capacity possessed by T-Mobile, the clear leader in terms of amount of mid-band spectrum. 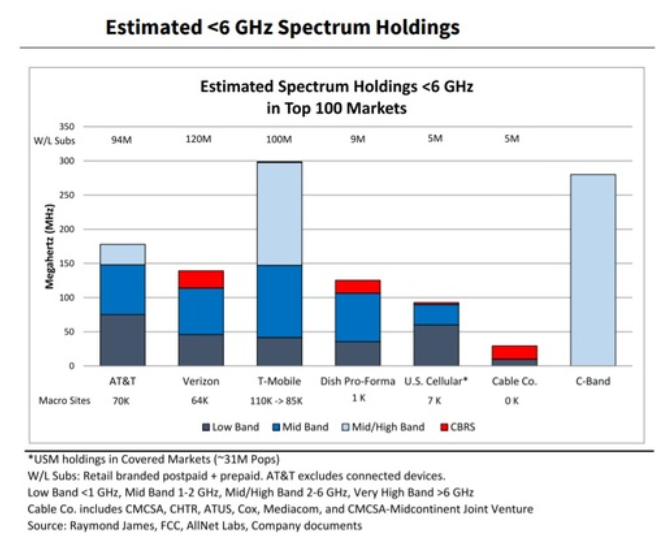 While mid-band spectrum (2 GHz up to 6 GHz) does not offer the order of magnitude capacity and speed increases of millimeter wave spectrum, it does support faster provisioning of nationwide coverage at reasonable cost and also demonstrable speed and capacity gains over 4G.

The reason is simply that mid-band signals propagate much further than millimeter wave signals, often allowing co-location of 5G radios at existing 4G sites, for example. Mid-band signals also can use the existing macrocell architecture, rather than requiring a whole new small cell network to be built.

Many will worry about the added debt burden (more than $81 billion and possibly as high as $91 billion after existing users are cleared) as firms pay for their licenses. That noted, licensed spectrum is the foundation for mobile operator business models at scale. Failure to win additional C-band spectrum could be fatal for all suppliers except T-Mobile.

C-band assets are expensive, to be sure. But they also are necessary table stakes for would-be 5G market share leaders.