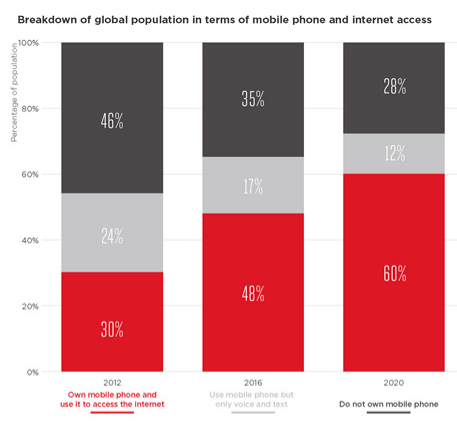 Subscriber growth in developed markets is largely over, and while there is some incremental revenue growth from higher mobile internet spending, long term growth will largely be limited to growth of gross domestic product, which tends to be in low single digits.
For public companies, and most tier-one telcos are public, that is insufficient to retain investor support at a level that drives up equity value.

source: GSMA
That means most public service providers will have to look beyond connectivity services to grow revenue faster. As hard as that will always be, there is no practical alternative. Some might argue telcos are misguided in deploying resources to gain new positions in the content and applications parts of the ecosystem. Some regulators seem intent on preventing such vertical integration.
Those views arguably are misguided. Without investment beyond “dumb pipe,” providers of retail telecom services face a difficult future. A public company growing revenue at one to three percent annually is not going to get attractive valuations. Beyond that, it is not clear that even those rates of revenue growth are possible on an organic basis. In other words, without major acquisitions, even low-single-digit rates of revenue growth might be difficult.
The old “telecom” business is changing. Survivors in the retail segment will have multiple revenue streams beyond data access. Even in the wide area networks business, including the subsea segment, much of the revenue potential now (growth) now is capped by the growing reliance on enterprise owned and operated  private networks.
By 2016, more than 70 percent of all internet traffic across the Atlantic was carried over private networks, not on public WAN networks.
On intra-Asian routes, private networks in 2016 carried 60 percent of all traffic. On trans-Pacific routes, private networks carried about 58 percent of traffic.
That is one manifestation of how important it ultimately will be to move revenue streams away from a sole reliance on bit transport (internet access, WAN data transport) supplied to end users (business and consumer).