New entrants into existing markets often face a “trust” issue. Buyers cannot be sure the new provider will deliver value at least as much value as the existing providers without disrupting existing processes.

New technologies or services often face a similar problem: as attractive the benefits are touted to be, enterprises do not fully trust the promises and want protection from unexpected problems.

There are established value propositions that enterprises will accept–and which suppliers can offer–to gain trust.

A time-tested value proposition is “keep your existing suppliers, but add us as a backup.” The incremental value then is resiliency without disruption of current processes. That is the strategy pursued by non-dominant connectivity providers in local access or business bandwidth markets, for example.

The same approach–”use us as a backup”–also works for alternate networking platforms. MCI used point-to-point microwave in that manner. Cable companies used the approach when pitching cable modem service to business customers.

That is likely to play out in some 5G areas as well. Whether firms are relative slow adopters or fast adopters, the drivers for 5G are likely to center on support for remote work and higher bandwidth, IDC reports, after surveying some 600 information technology executives about 5G.

The expected adoption cases follow the augmentation pattern. Improved latency performance, a prime 5G attribute, is not expected by information technology executives to drive early deployment. Instead, current issues such as support for remote work are listed as the key drivers.

Longer term, that should change, as executives expect 5G to be more important for sensor operations and mission-critical surveillance and control. 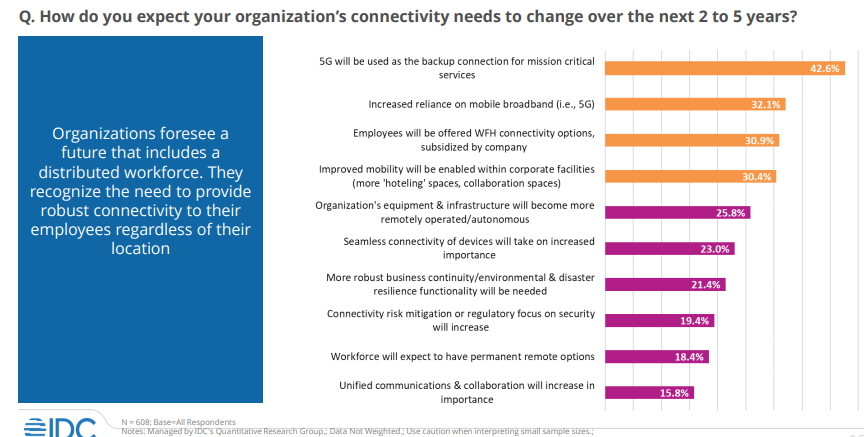 The point is, all hype aside, 5G is likely to be deployed as have other new technologies and tools: incrementally at first, to support use cases that do not disrupt present operations. Buyers will not rip out what they have to replace with 5G; instead they will augment.